The Sacred Andean Tradition Retreats 2022 » Our Tawantinsuyo in South Africa 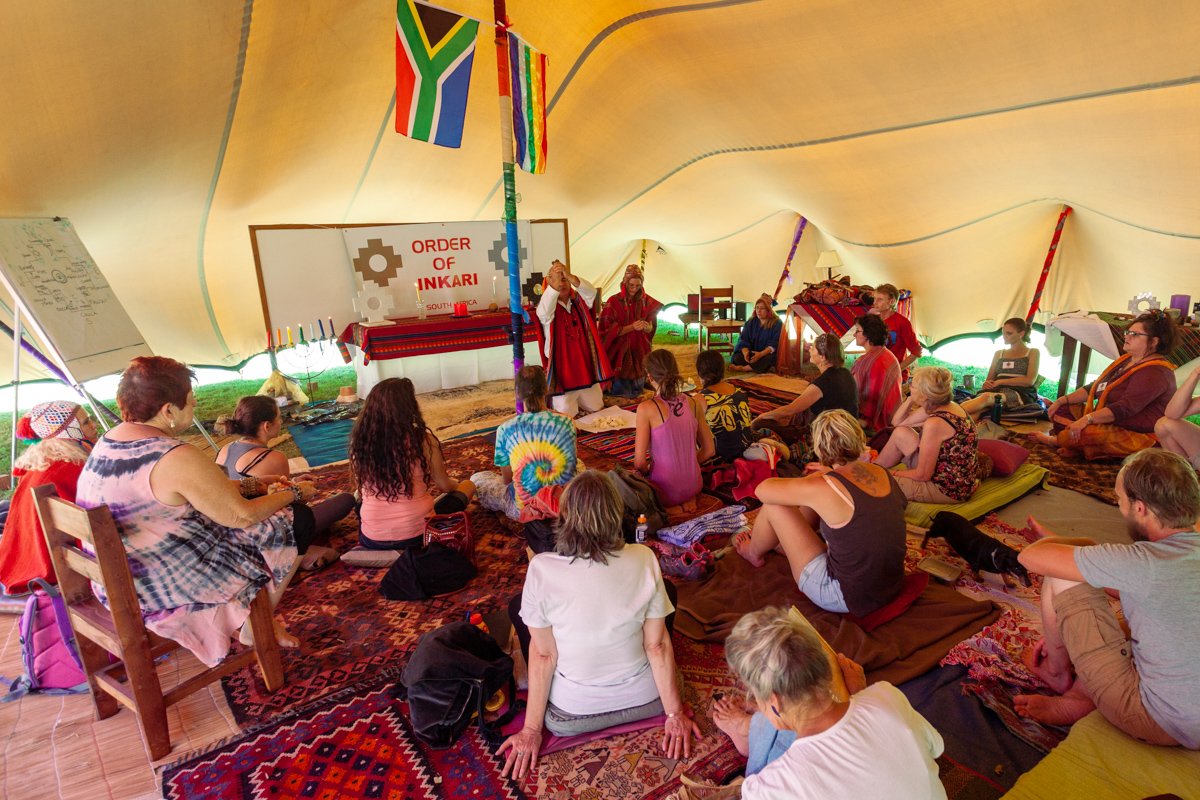 The last time the Andes saw the social structure based on the Chakana principles called Tawantinsuyo was in the fifteen hundreds, when the Spanish conquistadors confronted the last Inca rulers, Huascar and Atahualpa. After 300 years of colonialism, the Andean territories gained independence and became Republics. Currently, South American countries are celebrating 200 years of independence, which makes over 500 years since indigenous cultures freely existed in that territory.

The ancient peoples of the Tawantinsuyo understood the cyclic nature of life and knew that the sacred order of Illa Ticsi Wiracocha, would be restored in the next Pachakuti (energy cycles of approximately 500 hundred years of alternate light and dense social, political and economic forces).  During the long period of formal absence of the Inca rule, the profound level of consciousness achieved in the Tawantinsuyo shifted to vibrational levels that could not be touched by the dominant culture of the day. Patiently and naturally, the Andean priests and wise teachers, conveyed the principles of the Tawantinsuyo, in other words, the wisdom of the Chakana, through the observance of the teachings of the Sacred Andean Tradition (SAT).

Oral traditions, ceremonies, teachings, were integrated in the Andean people’s cellular memory as various expressions of Andean Tradition. However, the lineage of the Inca was transmitted over the centuries from Amawta to Amawta, the wisdom keepers of the Sacred Andean Tradition.

The transmission of the Karpay was and is the energetic SAT seed given from master to disciple. It’s been effectively five hundred years of Andean priests and priestesses, Pampa misayoq, Alto misayoq and Kuraq Akulleq masters sharing and teaching by example the ancient wisdom of the Chakana.

In the 1950’s, as the next Pachakuti was being expected, light in the form of information opened up in the South American Andes. The Inca highest spiritual representative, the Willak Umu, born in Cuzco, was responsible for teaching the next generation of Sacred Andean Tradition priests, Kuraq Akulleq, who were destined to live through the years of transition into the next Light Pachakuti, expected to manifest in 2012.  He was Kamaq Wageaq’s teacher, Oscar Tejeira Cabrejos.

By 1990, Regis Kamaq Wageaq, received instructions from his Master, to register in the Peruvian Registry of Companies, the organisation Order of Inkari, Solar priesthood of the Sacred Andean Tradition. In preparation for the coming years of teachings and initiations of Kuraq Akulleq, in Peru and the world. Towards the end of the 90s, an invitation to bring the Sacred Andean Tradition teachings to South Africa arrived at Regis’ doorstep. He immediately told his Master about it, and to his surprise, his teacher was overwhelmed with joy, because the prophecies of Inka Pachakuteq, which spoke about the Sacred Andean Tradition reconnecting with the land of Africa, where humanity originated, were coming to be.

Kamaq Wageaq and Hatun Runa, Kuraq Akulleqs of the Order of Inkari of the Sacred Andean Tradition, came to South Africa in 1999.  Bringing the wisdom of the ancient Chakana to our community of initiates. The teachings occurred at various levels and layers of consciousness, but the most important instance of energy transmission occurred during the Karpay. We were receiving the seeds of the Tawantinsuyo.

Year after year since 2000, South African initiates received their third level initiation in Cuzco, Peru. We learned about the Andean cosmovision, we learned about the celebration of the thanksgiving ceremony called Despacho and embarked in the journey of integration of this sacred ancient consciousness.

Approximately 5 years ago, Kamaq Wageaq saw it was time to set our identity simply as the Sacred Andean Tradition South Africa. Our level of understanding of the Chakana, had reached the depth to make the manifestation of our own South African Tawantinsuyo possible. However, this was not an easy transition. Energetically, our SAT community was coming to some form of end of a cycle, effectively 21 years of teachings, workshops, initiations, friendships, breakups, people moving on, people leaving, but also people coming back after a few years!

The teachings of the Chakana are so simple, the observation of Nature, the four directions, the four elements, the realization that we are earth, we are water, we are air, we are fire. Concepts that hold cosmic truths, like (unconditional) Love -Munay, the energy of life. Wisdom – Yachay, the understanding of the vibrational frequencies of harmonic existence. Service – Llankay, the conscious decision to work for the benefit of the community, for a common purpose. And, to flow in the evolutionary spiral of the Sacred Andean Tradition consciousness, we need to be balanced by continuously practising Ayni.

Ayni becomes the basis of our Tawantinsuyo community. Reciprocity. True understanding of ayni may start only in our heart centre. To reach our heart centre we must be in balance. The Sacred Andean Tradition reminds us of who we are, as natural energy beings, existing in multidimensional instances of the Ukhu pacha, the Kay pacha and the Hanaq pacha. We are reminded of the simple truth that we are children of Pachamama and Pachatata. Loved and protected by Tayta Inti and MamaKilla. Eternally connected to creator, source, Illa Ticsi Wiracocha. This eternal connection is AYNI.

Regis, Kamaq Wageaq, received from his beloved teacher, the responsibility of being the Sacred Andean Tradition Willak Umu during this time of announced shift. The Willak Umu of Inca times, was the Spiritual Advisor of the Sapa Inca, was the supreme high priest, the oracle, the wisdom keeper of the Tawantinsuyo. Therefore, it is significant that Kamaq Wageaq, the current Willak Umu of the Sacred Andean Tradition, of the Inca lineage, has given us the guidance to restructure our SAT community as the South African Tawantinsuyo.

Our level of understanding of the wisdom of the Chakana, the connection of our heart resonance with Pachamama’s heart, the absolute love for MamaAfrica, are the foundations of this South African Tawantinsuyo we are busy creating. This is a community effort emanating from the three worlds: the Ukhu pacha, Kay pacha and Hanaq pacha, bringing together infinite energy beings.  Each mesa carrier, each paq’o of the Sacred Andean Tradition has responded to a message from the ancient Andean Apus, connecting to the primordial frequency of Pangea, the most ancient earth expression which is Southern Africa. Our South African Apus: Amatola, Magaliesburg, Table Mountain and Drakensberg are being honoured in this age of consciousness shift.

The last SAT Workshop of February 2020 started this process of transmutation. Within days of Regis’ return to Peru, the world went into lockdown. We could not celebrate community Despachos, we had to adapt and started our On-line activities. And in some cases, members of the SAT who had been away for years, or members who had moved overseas, were brought close again by the heart resonance of our ancient tradition. Reaching out to each other through our Mesas, through our teachings, through our thanksgiving ceremonies. Now, 2022 seems to open up fresh SAT Workshops for us. During this transitional time of creation, we are not only manifesting our South African Tawantinsuyo, but we are also planning next year’s workshops.

Applying the principle of energy motion … IMAGINATION, VISUALIZATION, CONCENTRATION, SENSATION, and bringing our full intention, we are aiming to manifest venues, participants, helpers and the most amazing AYNI during our SAT workshops in April – May 2022.

The Garden Route will organise the Sacred Andean Tradition Workshop from Friday 15th to Monday 18th April 2022. The workshop will include Paqo initiation. Then on Tuesday 19th and Wednesday 20th April 2022 will run the Pampa misayoq workshop and initiation.

During the weekend of Saturday 23rd and Sunday 24th April 2022, we will organise a 3.2 level Llaqta Alto misayoq workshop and initiation in Gauteng. We are bringing this information out to reach 3.1 Ayllu Alto misayoq initiates who may feel the call to continue with their Sacred Andean Tradition initiations.

After Llaqta Alto misayoq initiation, we will have a 3.3 Suyo Alto misayoq workshop and initiation, on Tuesday 26th and Wednesday 27th April 2022, in Gauteng. Again, please communicate among 3.2 initiates the dates of this Sacred Andean Tradition initiation.

The Sacred Andean Tradition Workshop in Gauteng will be from Friday 29th April to Monday 2nd May 2022. The workshop will include Paqo initiation. Then on Tuesday 3rd and Wednesday 4th May 2022 will run the Pampa misayoq workshop and initiation.

Our South African Tawantinsuyo structure brings the community (all members of the Sacred Andean Tradition who initiated in South Africa) at the centre of the Chakana. And Suyo alto misayoqs and Kuraq Akulleqs coordinating our activities with the support of all initiates.